On my journey of transformation, a massive, vertical cliff of discomfort and change calls to me.  It says, “come climb my steep, hard surface.  It will be very difficult and perilous, but not impossible.  Here is where the real work begins!”

The past week has been rife with supposed conflict and negativity, and my moods have consistently spiraled downward.  However, if I step back and look at the bigger picture, all of it is pushing me further toward unprecedented change, both internally and externally.  Like a carefully composed opera.  I’m actually being forced to step out of my comfort zone and clearly choose which way I will go on the road ahead.

I’m a fairly stubborn person (to a fault and in all the wrong ways) and, even in misery, have become quite comfortable in my own situation.  It’s not even close to being the life I desired for myself, but it’s been familiar and comfortable.  I settled into what I believed I deserved.  Now, something out there, or in here, wants to quash those believes.  It doesn’t want this same existence for me.  God, the Universe, that inner seed–Once it starts growing, there’s no stopping it.  The seed of change has sprouted!  Now, I must love it, water and feed it, and call it George :-), so that it will flourish.

I’ve had to make some incredibly hard choices in recent years, and more to the point, heavier, heartbreaking sacrifices–but they didn’t kill me.  Write it again–They didn’t kill me.  I choose whether my life will be diminished by these events or not.  I can’t kid myself, some days are undeniably hard.  Some days I can barely get out of bed, but I do.   Now I’m trying to face those days while looking through a more open and honest lens.  It doesn’t always work.

I think some people may think that I’m done with the bad stuff–the hurdles, I survived the cancer.  I’m good now.  But that’s so far from the truth.  Yes, I’ve won that battle for now; but I’ve been seriously wounded and still standing in the full midst of the war.  Like a storm still in full force.  Yes, I survived that massive wave.  It didn’t take me under, but I’m still being rocked this way and that with an, at least perceived, ongoing threat of capsizing.

Time to climb the precipice. Women who inherit mutations in high-risk genes that sharply increase the risk of breast or ovarian cancer can reduce their risk of death by 77% by having their ovaries removed by age 35, a new study shows.

The study involved mutations in the genes BRCA1 and BRCA2, which cause 5% to 10% of breast cancers and 15% of ovarian cancers, according to the National Cancer Institute.

Up to 70% of women who learn that they carry these mutations choose to have their ovaries removed to reduce the risk of ovarian and breast cancer, research shows.

In the study, in Monday’s Journal of Clinical Oncology, surgery offered different benefits based on the exact mutation.

Women with a mutation in the gene BRCA1 get the clearest benefit to ovary-removal surgery by age 35, says study author Steven Narod, a professor of medicine at the University of Toronto. His study didn’t find any ovarian cancers in women with BRCA2 mutations until age 40. So BRCA2 carriers can likely wait until age 40 for ovarian removal, he says. … [click here to read more]

Okay, so it’s the last week of my raw foods boot camp and I’ve been miserable about posting anything to my blog lately.  Should have been better at posting this little raw foods journey, but the good news is I’ve decided to extend the boot camp challenge for myself for another 28 days (and actually diligently do the workbook exercises and make a ton more of the recipes).  I will also try to be more diligent about capturing my journey here.  I can note that although I’ve been awful about journeling and doing the homework every night, I can say I’ve been juicing every day and eating at least 60 percent of my daily food intake totally raw.  I’ve certainly been eating healthier but still haven’t lost any weight just yet.  The next phase is to get moving on the fitness portion!  As I tailor my diet more and get the fitness portion in line, hopefully then I’ll start seeing some real improvement in that area.

Last Monday I talked a friend into visiting a farm and separate, local garden only 5 minutes from my house.  The farm (Wild River Farm) is currently growing different types of greens – Kale, Arugula, Bib Lettuce, Basil, Buttercrunch Lettuce, etc., as well as some tomatoes.   They also have a blueberry patch that will be ready for harvest in the spring and an apple orchard.  The nicest thing is you can purchase a whole lettuce plant for around $2.00 and they pull them with the roots intact, which keeps them fresh for much longer.  The local garden hasn’t completely come to fruition yet, but looks to be another place to harvest and purchase local produce soon.  I plan to make these places weekly or bi-weekly shopping excursions and I’m thinking of joining the Wheatsville Coop as they seem to have the best selection of locally grown, organic produce around.

Some days I miss making my own green juice or smoothie in the morning, so on those days I’ve been stopping at Skinny Limits food truck off of Lake Austin Blvd and Mopac and getting one of their yummy juices.  I’ve also tried their RAWmazing chips and queso (made from cashews) and the RAW Garden Pud Thai.  They are both super yummy!  Today I was given some of their RAW mock egg salad to try.  I think it’s made from cauliflower.

At work, we’ve decided to do another Biggest Loser Challange.  It starts this week and goes for four months.  We’ll be doing more group activities and fitness challenges and tracking weekly walking efforts so it’ll definitely challenge us more.  Since I won’t be undergoing chemo at the same time this time around, the fitness challenges will be super helpful to me.  I begin physical therapy tomorrow which will help me get on a better fitness track as well.

I feel that my efforts are slow going, particularly with regard to the weight loss; but the foods I’m consuming now versus what I used to have changed dramatically!  I do need to fine-tune my eating habits, such as the times I eat during the day and night and I need to become more mindful while eating.  However, to make these become lifelong changes, slow incorporation is key.

The last couple days I’ve felt completely knocked off the horse of positive vibes.  Like I’ve been punched in the gut and lying face down in the dirt.  Couldn’t seem to stop the waterworks yesterday.  Honestly, if we didn’t have these times of feeling completely shattered, we just wouldn’t be normal or human.  No one can stay on the the high wire of feeling positive and in control all the time.  Most often not!  Especially with all this crap!!!!!!!!  Can’t say that enough!  Honestly, I think I’ve been doing really well compared to most.  You’re gonna lose your balance and fall at least some of the time, maybe even a lot of the time.  The trick is getting up, dusting yourself off and getting back on that high wire.  Some days are tougher than others, for sure!

I’ve been doing semi-good with my raw foods boot camp.  We’re at the 10 day mark.  Toughest part, or what I have not been doing well at, is the workbook/homework.  Totally lacking in this area.  What I have been doing well at is eating tons of organic, yummy greens, a huge variety of colorful veggies and fruits, and I’ve been juicing or drinking green smoothies nearly every day and sometimes twice a day.  I’ve not yet followed the good nutrition with lots of exercise, and haven’t cut the sweets entirely, but this is much improved.  It’s a good start!  And it appears I’ve lost 3 lbs so far.  It’s at least something but I do need to seriously step up my game!

A friend, Kamishia, suggested another good site to check out:  http://wellnessmama.com/.

Well, I’ve started the ‘Raw Foods on a Budget Boot Camp.’  We had our first group support call last night and I have to say I’m so excited as the instructor has such an amazing wealth of knowledge on the subject matter.  You can learn more about her books and the program here (click on the images below to be taken to the web site page):

I have loaded my fridge and pantry with tons of raw food ingredients and started fresh this morning with a green smoothie and made a basic salad for lunch.  I’m not totally going raw foods right off the bat.  Even the instructor, Brandi, stated you should incorporate your raw foods slowly, as you want it to be a lifestyle change.  If I can get to about 70-80% raw food, I will be happy!  I believe in taking what you can from a variety of food programs/diets/sources and then making a customized program that fits you.  I may decide to become entirely a raw foodie at some point, but not right away.  Going too extreme with any one diet/food program just doesn’t work for me.  My goal at present is just in learning to become super healthy and use my diet to my benefit instead of my detriment.

You can make coconut bacon yourself (coconut bacon recipe – raw or cooked from ChoosingRaw.com or Coconut Bacon from theVeganProject.com), but here it is already made.  Recipes using coconut bacon can be found at above link also.

Did you know cauliflower can be used not only as a substitute for mashed potatoes (which can be made so delish and similar to the real thing, you’d almost swear you were scarfing down potatoes!), but also as a great substitute for rice and couscous?  You can even make pizza crust, pudding and buttery popcorn from it.  See below links for recipes.  Cauliflower comes in a variety of colors from white to purple to green and my favorite, orange.  It “is also rich in nutrients and, like its cousins, cabbage, kale, and broccoli, provides health-promoting compounds not found in many other vegetables” – see the World’s Healthiest Foods – Cauliflower.  Bonus, one cup of cooked cauliflower is only 29 calories.

Raw Buttery Popcorn from The Rawtarian.com

Cauliflower with Lemon and Olives from EatingWell.com

I found yet another awesome juice truck around town.  SkinnyLimits (www.skinnylimits.com) has locations all over Austin.

Okay, so this morning I decided it was time to go rogue at work, so off with the wig!!!  Finally!!!  They are so hot and itchy!  My hair is still super, super short but at least covering my head enough, I think.  I’ve gotten rave reviews from my co-workers, so that’s good!  Here are a few wigless selfies I took today at work.  Wig be damned!  Yay! 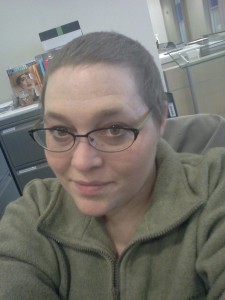 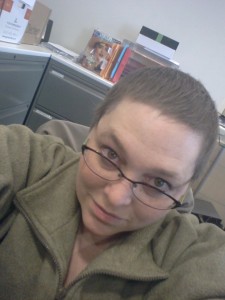 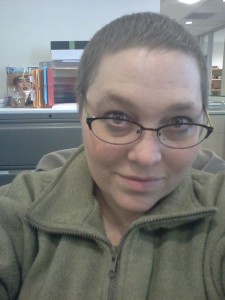 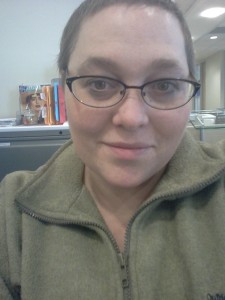