Yesterday, another treatment done!  Went very smoothly.  I think my labs were good as usual.  Coumadin level a little high but haven’t been tackling the greens as normal either.  They reduced my dosage.

Nice to see the warm face of a friend from way back when.  If I didn’t mention, a girlfriend I knew from middle school is the pharmacist at the TxOnc where I get my treatments at.  She comes and chats with me when I’m there.  What a nice surprise that is–to meet up with an old friend from so long ago.  I enjoy seeing her every time I go!

Had nurse Pat this time.  She rocks and literally saved my life as she was the one to recognize I likely had a blood clot.  That woman is an amazing nurse!

The Yin and Yang of It All
God turns you from one feeling to another
And teaches you by means of opposites
So that you will have two wings to fly,
Not one. - Rumi

My doctor’s office has concluded I have a skin infection on my breast.  The nurse initially stated it sounded like a reaction to the Taxol and that they’d likely have to place me back on steroids–Something I don’t want to do.  They’ve decided to place me on antibiotics for 10 days to see if it clears.  Sara, the nurse practitioner, said to me, “tell your body to stop making complications for us.”  I said “I’ll try, but I don’t think it’s listening to me.”

Dust if you must, but wouldn’t it be better
To paint a picture, or write a letter,
Bake a cake, or plant a seed;
Ponder the difference between want and need?

Dust if you must, but there’s not much time,
With rivers to swim, and mountains to climb;
Music to hear, and books to read;
Friends to cherish, and life to lead.

Dust if you must, but the world’s out there
With the sun in your eyes, and the wind in your hair;
A flutter of snow, a shower of rain,
This day will not come around again.

Dust if you must, but bear in mind,
Old age will come and it’s not kind.
And when you go (and go you must)
You, yourself, will make more dust.

Ugh!  So, over the weekend I developed an odd, itchy, red rash on the lower portion of my right breast.  Take it from me, and as other women in survivor networks will attest, when you have BC, anything out of the ordinary will freak you out, especially on your breast.  Seriously though, I feel like I’m always having to ask, “what next?”  It’s like a tumbling effect.  Once you have one thing happen, numerous other things tend to follow.  I have to go in for lab work today and have called to see if my doctor or the nurse practitioner can fit me in just to take a look.  I’m not seriously stressin’ about it because I’ve learned there’s no point in that.   Just another thing I guess, but hoping it’s nothing serious.

So it’s Thursday and I’m back at chemo treatment.  The infusion room is pretty packed today.  They checked my Coumadin level and it’s still lower than they’d like it to be so I have to continue the shots and up the pills.  Bummer!  I appear to be having a severe psoriasis attack on the back of my hands–my body reacting angerly to the Taxol.  It looks so awful! :'(

The good news is no severe chills or hot flashes.  Maybe they were side effects of the steroids, which they’ve tappered me off of now.

A number of people finished their chemo today.  There’s a bell hanging on the wall at the front of the infusion room.  When you’re done with all you’re chemo treatments you ring the bell and everyone claps and cheers.  Quite a few rung the bell today.  Yay!  You go my fellow C-bravin’ peeps!  Hope you all keep rockin’ on cancer-free!

They had a party for one woman and were passing out cupcakes.  Mine had Big Bird on it with the message, “pluck you cancer.”  I just had to take a picture! 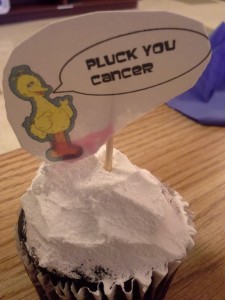 The icing didn’t initially look like that.  It was all swirly like on most cupcakes, but I started in on it first with my fingers taking a tiny bit at a time.  Now it kinda looks like Big Bird standing on a huge mountain (okay, not so huge, but Big Bird is a big bird) with his “pluck you cancer” flag planted firmly in the ground.  Any minute now he’ll also belt out, “VIVA LA VIDA VICTORIOUS!”  Well, you know, Big Bird is also bilingual.

The cupcake was good too.

Last Friday was a very quiet day at work.  I had projects to complete, but in doing so had some time to converse with my counterpart.  We talked about where we both are in our lives, how dissatisfied we currently are and steps we needed to take to gain a different prospective on things.  We talked about:

We each made a committment to take one small action, before October 1st, toward a more purpose-filled life.  My action is to read The Untethered Soul by Michael Singer (of which I purchased two copies months back–one in hard copy and the other more recently on my Kindle).  She had just finished it and pleaded that it is a must-read.  Her action is to develop an advertisement and e-mail address for a like-minded, intention-driven, single parents group.

I can’t tell you how much I appreciated our conversation and how afterward the vice I’d felt so caught in seemed to loosen.   Even the glimpse of a different prospective on any situation can do wonders.

Something to keep striving for in my daily life:

Be Impeccable With Your Word: Speak with integrity. Say only what you mean. Avoid using the word to speak against yourself or to gossip about others. Use the power of your word in the direction of truth and love.

Always Do Your Best: Your best is going to change from moment to moment; it will be different when you are healthy as opposed to sick. Under any circumstance, simply do your best, and you will avoid self-judgment, self-abuse, and regret.

Don’t Take Anything Personally: Nothing others do is because of you. What others say and do is a projection of their own reality, their own dream. When you are immune to the opinions and actions of others, you won’t be the victim of needless suffering.

Don’t Make Assumptions: Find the courage to ask questions and to express what you really want. Communicate with others as clearly as you can to avoid misunderstandings, sadness, and drama. With just this one agreement, you can completely transform your life.

Be Skeptical, but Learn to Listen: Don’t believe yourself or anybody else. Use the power of doubt to question everything you hear: Is it really the truth? Listen to the intent behind the words, and you will understand the real message.

So, now that I’ve been on blood thinners for the blood clot caught a couple weeks ago, my face has returned to a normal state of appearance.  I can look in the mirror again without cringing.  Its bizarre how physically distorted my features became; and no, I didn’t take any pictures!

My stomach is now badly bruised from the twice daily injections.  My doctor is transitioning me to Coumidan, which is a pill form of the blood thinners.  Apparently, you have to watch how much vitamin K you consume while on Coumidan, i.e., leafy green vegetables.  Since that’s my base diet, the nurse practitioner stated to continue as normal and they’d just adjust the level of Coumidan to fit my diet.  I’ll just have to maintain consistency with the amounts of vitamin K foods I’m eating.  Time to get into a groove, and I guess it beats dying from a blood clot.  I was told I’ll have to stay on the blood thinners for at least 3-6 months.  She stated the medication doesn’t actually take care of the clot.  It just thins the blood and then your body resolves the clot on its own over time.

My doctor also stated my port could still be accessed for treatment, as treatment through the veins in my arms along with taking the daily shots would be a bit much.  So, last Thursday I had Taxol treatment as normal.  It went rather smoothly.  I initially started getting severe chills again.  I requested two blankets which helped; but then I got up, grabbed my IV pole and started to walk around a bit.  The chills then subsided.  It appears movement definitely helps.

I had a not-so-great visit with my doctor last week.  The CT scan revealed more than I wanted to know.  I couldn’t assimilate all of the information my doctor was spouting out.  Then the conversation turned to a discussion about the best plan for surgery.  Since my weight hasn’t significantly been reduced (I’d even gained 5-7 lbs with the swelling from the clot), she pressed me about having the mastectomies after chemo regardless of reconstruction timing.  All the information was swirling around in my head.  I was still trying to absorb everything.  For days afterward I felt like I’d been placed in an enormous vice and it just kept getting tighter and tighter–Oh, the depression.  Now I’m just trying to gain a better prospective on it all.

A little good news–I’ve lost a total of 12 lbs since last Monday.  Half of what was lost was likely from the swelling induced by the clot.  My goal is to lose 3 more lbs by treatment Thursday.  I had a setback last night with a margarita and some chocolate, but I’ll press on!

I realize I haven’t been posting recently.   Honestly, I haven’t felt up to it.  I’ll rebound as there are things to post about.  I guess I’ve just been in a funk.

I was watching a movie about 9/11 last night and one of the characters said something that really hit home.  I guess it was how very simple and beautiful it sounded.  I can’t really remember the exact wording, but it was something like: “you never know what wonders are hiding in the people around you.”   Meaning that we all have natural gifts, special skills, past events or connections, little know facts, unique qualities, etc. that make us fascinating to be around.  What a true and beautiful statement!   I mean, you’d think it’d be fairly obvious but most of us take this thought for granted.  Something to keep at the forefront of our minds with everyone we come into contact with on a daily basis.