The past two days I think have been the worst of my bad days.  Thank God that was the last of my AC treatments.  I feel like death warmed over.  I start Taxol in two weeks.  I’ll have 12 weeks of that, but my doctor and nurses said the AC is supposed to be the worst of it so I’m hoping the Taxol will be smoother sailing.

Today is my last treatment of Adriamycin + Cytoxan.  Yay!  I have another excellent nurse, Pat.  However, it’s been super busy today at TxOnc so I’ve been here most of the day (since 9:30a and it’s now almost 2:00p.  Still have another hour at least).  Will likely go home and crash from here.  I’ll return in two weeks to start 12 weeks of Taxol.

In other news, I found a dead armadillo in my backyard this morning.  Had my dogs killed it?  Had they been playing with its dead carcass?  Did they eat any of it?  It was way to gross to examine more thoroughly, the flies were swarming and it had such a non-lovely smell to boot.  I tossed it over the fence with a shovel, but it was still kinda freaking me out so I called my vet’s office.  They said they didn’t think I had anything to worry about.  Rabbies?  Leprosy?  No.  If my dogs killed it, it was probably a good thing.  They said it likely dug under the fence somewhere and that an armadillo will tear up your yard.  Not that my dogs hadn’t already done a good job of that.  They said my pups should be fine.  Oh good, so they won’t turn into killer, zombie dogs?  What a relief!

Come to think of it, the other night both Mo and Greta came in a little worse for wear.  Greta with scrapes above and below her right eye and Mo with a small, bloody spot on his side.  Oh, right.  Yes, I’m having a flashing lightbulb over head moment.  I thought maybe they had just played too rough.

Now it all makes sense.  My beasts are sweethearts, but I wouldn’t put killing an armadillo past them.  One day I came home and Mo was playing with a dead squirrel.  Another time Greta tried to tear the gutter drain off the side of the house to get to a trapped squirrel.  She succeeded but the squirrel got away.

They love to torment the squirrels.  The squirrels probably torment them too–Devious, little suckers.  One squirrel got stuck on the very tip top of one of my cedar trees screaming its head off until I called them to come inside.  Guess that squirrel’s plan backfired.  Greta was already half way up the tree.

Another time they killed a harmless tarantula.  I tried to stop them but it was too late.  I gently picked it up and the poor thing was still twitching, and then it died.

Aside from stepping out my front door to greet my brother, sister-in-law and nephew on my front porch, I’ve been held up inside riding the wave of bad days.  Movies and TV galore.  You can never see enough Law and Order SVU.  I did rent “Warm Bodies” on PPV.  I have to say, I’ve been sick of the overkill of zombie movies in recent years, but Warm Bodies was a refreshing surprise.  Love the angle of corpse’s point of view.  Loved it!

Feeling better and plan to be to my old self tomorrow.

On another note, diet plan has been difficult.  It seems what I desire most during bad days is fruit.  Citrus, water-filled fruit!  May need to rethink cutting fruit altogether. 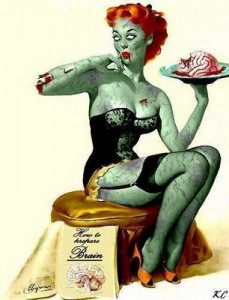 Well, it’s Friday.  Only two days after treatment.  It’s hitting me earlier than usual. Feel like maybe I overdid it at the Y last night.  Went into work this morning but was feeling so bad had to leave within an hour.  I somehow made it home and have been couching it since.  Feeling miserable.  I moved up my treatment day in an effort to reduce any extra time off work.  Just can’t seem to win either way.

I’m coming to you live from the infusion room at Texas Oncology. Today is treatment day.  My third round of AC (Adriamycin and Cytoxan).  I normally come on Thursdays, but since the bad days don’t seem to hit me until about 4-5 days in, I figure moving my treatment date up will put the bad days closer to the weekend.  That way I’m not missing work if I don’t have to.

Bloodwork has come back and I appear to be doing fabulous on all counts, and with little to no side effects to boot.  Sure, I’m definitely having my bad days with nausea, fatigue and just feeling totally crappy, but all and all I’m rockin’ this chemo train–ain’t no thang!

I usually put this lidocaine cream on my port site before coming to treatment but it doesn’t help much because they always have to dig into my chest to find the port, which is attached to the muscle and can be super sore once they’re done.  I mentioned to the nurse this morning that the saline flush feels a bit like a rush of morphine running through my vein.  It’s a nice feeling.

Nurse Suzie is now injecting me with the “red devil” (Adriamycin).  See pics below.  My hands are shaking a bit but I think it’s the coffee, which I haven’t drank in days, maybe even weeks.

Side note:  Nurse Suzie rocks!  They all do here at TxOnc!  Good place to come if you ever join the “big C collective.”  Also, every now and then they have massage therapists come and give you feet or hand massages during treatment, which is a nice touch and free to patients through donations.  Somehow it was timed perfectly that I got a foot massage while getting my first dose of Adriamycin.  That was sweet! 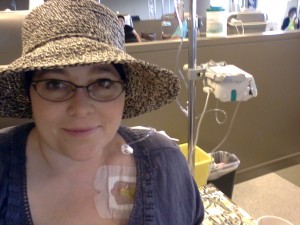 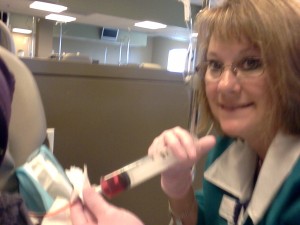 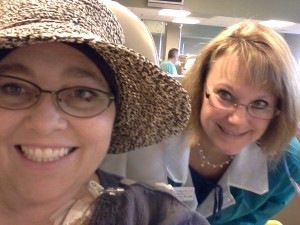 Did a serious workout in the cancer survivors’ class at the Y last night.  Focused on the Kinesis machines and did a short workout afterward with the Bosu ball.  That takes some practice for sure!  I really like the Kinesis machine.  You can get great workout on both.

It’s great to be able to do these workouts with other women survivors.  There’s a lot of camaraderie, good advice and support to go around.  Although I seem to be the only one doing the class through chemo.  The others finished their treatments and have commented on how brave I am to do the 3-month fitness program while actually going through chemo.  Guess we will see how tough I truly am when it gets closer to the finish line, because this is certainly a marathon and not a sprint!

One of the women in my class who had the same type breast cancer as me and a similar situation, but no mutation, stated to me that one of the chemo drugs I’m on, Cytoxan, is derived from mustard gas (I just looked it up and it’s true).  Freakin’ lovely! 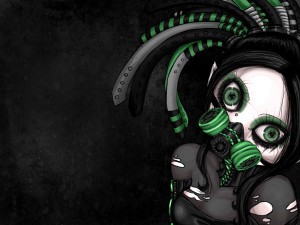 TGIF, and a better day at that.  I’m feeling physically, mentally and emotionally better than the past few days.  Any sick feeling has subsided.  Just as with the actual storms we’ve had this week, the clouds have lifted.  Looking forward to a night out with some of my girlfriends.  We’re going to see New Order tonight at the Austin Music Hall (yes, we’re kickin’ it old school).

And in other news, sometime last week on a sleepless night around 3:00 am I decided to drive to Marble Falls to venture around the local Wal-mart (which is virtually the only thing open at the time of morning).  Yeah, never got there.   I’m driving down a dark stretch of Hwy 71 toward the Hwy 281 turn when I spot a small, orange kitten bouncing between the grass and weeds at the edge of the road.  So, me being the good samaritan I am, I turned around and stopped to rescue the little guy (appeared to be around 6-9 weeks old, starved, thirsty and had obviously been dumped).  At first, the little thing darts out at me so happy to see someone to help.  But she was quickly scared by a passing car and jumped into some brush behind barbwired fencing.  Mind you it’s pitch black on this rural, Texas highway.  Nothing around but ranch land.  It took me a good 30 mins to an hour to coax the scared, little thing out.  Each time I got close to it another car would pass and scare her back into the brush.  Eventually, after much meowing by the both of us, I captured her.  It took another 30 mins just to coax her out of the car with some canned tuna.

Anyway, for days now I’ve had this damned kitten running around my house wreaking havoc.  I swore to myself no more cats after my beloved Picasso died last year.  I am perfectly happy with my two pups, Mo and Greta.  Last night it came to a head when she broke a very nice vase of mine while she was running and jumping and playing.  That was the last straw.  So out she went.  I put food and water out for her.   Aside from my neighbor’s dog running her up a tree last night (and that is where she spent the entire night), I think she likes it outside.  I was compassionate enough to check on her throughout the night.  She was playing around on my front porch this morning except for the time she spent under my car, making me late to work.  Hope she is still around when I get home tonight.

I did try several rescue groups but all are full up on cats and kittens.  Unless anyone out there wants a cat–???   And maybe I’ve grown a little fond of the tiny, orange tabby, but I’m not willing to give up my home to a cat again.  This is a sink or swim world!  If she sticks around and doesn’t get eaten by a snake or something, she’ll have to be an outside cat!  I’ve named her “Highway.”  Seemed appropriate.

Yesterday was not a good day but today is even worse.  Second round of chemo hitting me harder than the first. Not a day to say “suck it up.”  I think I will have to ride out this part of the storm with sleep.

I woke up last night drenched in sweat, shaking uncontrollably and with the worst nausea so far.  Still feeling it this morning.  Hoping to make it in to work this afternoon.  Have 3rd fitness class tonight at the YMCA and I need to make every class.  My new motto: Suck it up, Joanna!