This is my first post in weeks.  I’ve mainly been couching it recovering from surgery.  My close friend, Beth, came and stayed with me a few days as well as my friend, Kim.  They definitely kept me in good spirits and took wonderful care of me!  I also spent several days with my brother and sister-in-law, where my sister-in-law took amazing care of me as well.  Best part was being able to spend quality time with my 3 year old nephew, Luke.

As for my reference to “dog-deer days,” there is a doe in my neighborhood that was raised by a family here from a baby deer.  Her name is Daisy and she likes to come play with my dogs.  I live in the country and have stock fencing around my backyard.  They run up and down the fence line together and you can tell she playing with them because she’ll buck here and there and thrash her head around and jump and bat the fence with her little hoof.  Definitely play-mode.  My girlfriends, total city-dwellers, got such a kick out of this.  At one point she scratched at her ear with her hind hoof, like a dog would do, so my friend, Beth, started calling her the “dog-deer.” 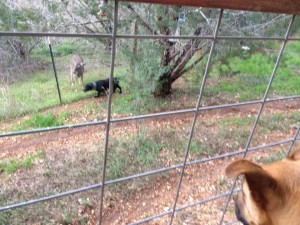 Anyway, though I have mostly been sucking down pain pills and sleeping, I’ve definitely had some cabin fever.  Luckily, a friend a couple streets over came and picked me up on Christmas Eve for a nice dinner party at her house.  I indulged in a glass or two of wine, which may not have been the best idea with my pain killers, but then again I wasn’t feeling the pain, which was a good thing.  I stayed for a couple hours and then she brought me home.  Even Christmas morning I didn’t feel I needed a pain pill but the pain definitely caught up to me as the day wore on.  I had Christmas with my family, which was nice and relaxing, but by the afternoon I was feeling the pain and needed to go home and lay down.  Spent most of the day (as with most all days of recovery) in my pjs.

I still have the drains in and have no idea when they’ll come out.  Even though no signs of cancer, my surgeon ended up taking 11 lymph nodes from my left side.  She stated she had to go up further than expected and they were part of the breast tissue.  That side has been producing much more fluid than the other side.  I also forgot about taking the antibiotics after returning home from staying with my brother and sister-in-law, which I realized Christmas night.  My right drain started having a bungent smell, which really started freaking me out.  I found the bottle of antibiotics and started taking it again.  Hopefully, everything is still okay (i.e., no infection).

I had my first follow up with my surgeon one week after surgery.  She stated everything looked good even though I wouldn’t like what I saw, but that it would be fixed upon reconstruction.

I can’t explain the freeing experience I’ve had in going through with the mastectomies.  The monkey on my shoulders has left the building.  I felt a renewed sense of self after surgery.  This was my biggest hurdle.  A massive brick wall that I didn’t jump over, but busted through.  Now I just have to stay on the path and keep going.

3 thoughts on “The dog-deer days of recovery”